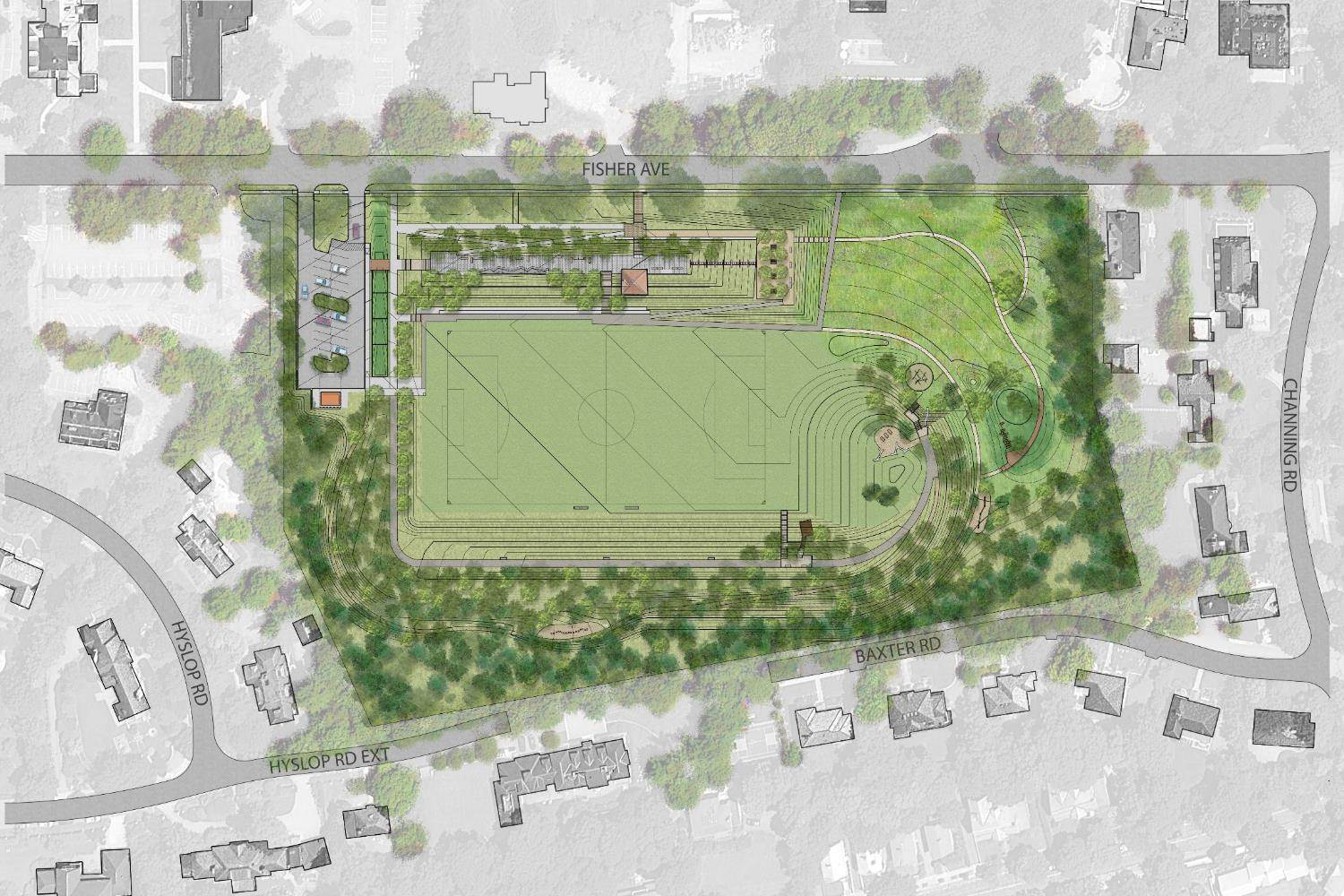 The Fisher Hill Reservoir Park project is an exciting and unique project in which the Town of Brookline is converting the former MWRA Fisher Hill Reservoir on Fisher Avenue, into a 10-acre park in an urban community with a clear deficit of open space. After a lengthy planning process, the town acquired the reservoir property from the state, and completed a final park design development process, with significant public input and support. The town is securing additional funding to implement the preferred design, and construction is underway.

Watch a tour of the construction at Fisher Hill Reservoir Park hosted by the Brookline Parks and Open Space Division and the Brookline Greenspace Alliance:

The park is approaching completion, with minor work items remaining. The play equipment custom fabricated by Mitch Ryerson is complete, almost all of the site furniture is in place, the decorative water feature is up and running, paving is complete except for the line markings in the parking lot, the athletic field is becoming established as well as the dry and wet meadows, the observation deck and railings overlooking the field is in place, and replacement of plant materials that did not survive is underway. The contractor has devoted two crew members to daily watering in order to counteract the effects of the drought. More plant replacements are likely to take place at the end of summer when the weather is more forgiving. Coordination with the roadway improvements along Fisher Avenue is ongoing, and we look forward to completion of both of these projects.

Construction has fully resumed now, with the focus on grading, placing the planting loam, and planting trees. So far more than 1,300 trees and shrubs have been delivered to the site and organized by species to facilitate planting. The strategy has been to start along the northern, western, and southern edges of the site and work our way towards the middle. We have been placing the evergreen trees first to ensure that the residential abutters are protected from views into their properties and to establish a visual structure. We are then placing deciduous shade trees followed by smaller deciduous trees that fill in the subcanopy level. We will locate the shrubs after that. The herbaceous ground plane will probably be planted in the fall, though some large areas have been hydroseeded. Not all of the plants have arrived on site yet; more are expected this month.

Mitch Ryerson and his team have also been working on his sculptural play piece which is being constructed out of peeled Black Locust logs. Peeling, shaping, and cutting of the logs are done primarily by hand, and then erection of the structure is accomplished with the help of construction equipment. It is exciting to see it all coming together and impressive to understand the teamwork required.

Screening of the native loam has now been completed and will be used on-site. Grading and placing of the gravel base for paths is underway, with some excavation for drainage swales to follow.

Construction is expected to resume in April after the winter shut-down. Work in the fall through mid-winter included an initial planting effort along the northern and western park boundaries, slope stabilization, screening and placing loam, construction of concrete seat walls, completion of the bulk of the utility work, and work on the overlook. Laying down the decking on the overlook was done in January, and after that the amount of snow put the project on hiatus. As soon as the snow is gone and the soils are dry enough to accept traffic, we will see work commence with a major planting effort, pouring of the concrete stairs and walls, continued screening and placing of loam, the last of the site grading, paving for paths and the parking lot, all finish treatments such as decorative paving and site furniture, installation of custom play features by the artist Mitch Ryerson, and sodding of the athletic field. We hope to open the park in the fall/winter of this year, though the field will need to remain closed until the turf’s root system is established and can stand up to athletic use.

Work on the historic gatehouse and the new comfort station was put on hold in December due to weather as well. Masonry work completed at the gatehouse included grinding of the mortar joints; next steps include pointing the joints and installing the windows funded by a Massachusetts Historical Commission grant. Work to be completed at the comfort station consists of completing the utilities, installing the copper roof, applying the exterior cladding, and installing the finishes.

Construction is ongoing on the site. At this point the majority of the site is subgraded and ready for topsoil. The topsoil that was stripped and stockpiled previously is being screened for reuse on site. The granite blocks have been removed from the berms as needed, and many are also stockpiled for reuse on site. Work is progressing on subsurface utilities including water, sewer and drain. Earlier this summer a large underground detention system was installed in the center of the park, underneath what will eventually be the athletic field and great lawn. Work has started on the viewing platform/overlook structure that will extend from the inside of the berm into the basin/field area, with the foundation being installed. Work is continuing on cast in place concrete stairs, with the stairs leading from the central Fisher Ave. entrance to the gatehouse already in place. An engraved concrete wall proclaims Fisher Hill Reservoir Park and is visible from Fisher Ave. A contract has been awarded and executed for stabilization and preservation of the gatehouse and construction of a comfort station. The Town has been awarded a grant from the Massachusetts Historical Commission for matching funds to assist with installation of historic windows in the gatehouse

Construction commenced with site preparation and land clearing operations. This included cutting and removing invasive, unhealthy and dead trees and other vegetation, which comprised the majority of the plant material on site. The project will include extensive replanting with a mix of evergreen and deciduous tree, shrub and herbaceous species.

As of mid-month most of the site had been cut and remains to be cleared out, including chipping of wood and removal / grinding of stumps. Land clearing should be completed by the end of the month. After the clearing and weather permitting, the general contractor will proceed with site work, including selective demolition, stripping and stockpiling of loam, and rough grading.

Project construction services go out to bid with the release of the request for proposals.

Final construction bid documents have been completed by the town and the design consultant team, Klopfer Martin Design Group (KMDG).

A preservation restriction was approved and executed for the historic gatehouse.

The town was selected for Parkland Acquisitions and Renovations for Communities (PARC) grant assistance from the state Division of Conservation Services, in the amount of $400,000 for park construction and development.

The final Fisher Hill Reservoir Park design will result in a spectacular new park in a high density neighborhood in the center of the town, with both active and passive recreational opportunities to serve a multigenerational community, preservation of the historic gatehouse and creative reuse of the reservoir berms and topography, a variety of plantings and wildlife habitat including woodlands and a wet meadow in addition to an open lawn area, and amenities such as seating and accessible walking paths, a comfort station, and parking.

Recreational opportunities include a new athletic field suitable for soccer, lacrosse and other sports, which will help meet a town-wide need for additional athletic fields, as well serving as a great lawn for relaxation and events. The town currently has very few designated rectangular playing fields, with the nearest over 1.5 miles away, and most existing fields are smaller in size and/or the field is overlapped by baseball / softball fields. The new park will also provide the closest athletic field to Brookline High School.

A significant portion of the reservoir berm is being retained and will serve as seating and open play space. Other play and gathering spaces exist throughout the site, including a hilltop seating area and viewing platform, which will provide views of the park and the surrounding skyline, as well as space that will be used as an outdoor classroom for environmental and other educational programs. By the Fisher Avenue side of the park, there will be a beautiful promenade with benches, plantings, and site interpretation. This space will provide not only a grand entrance and views into the park, but will also showcase the historic gatehouse.

This gatehouse was built in 1887, designed by Arthur Vinal, and is an important visual marker of the historic nature of the site. Its reuse will assure its permanent presence in the life of the community.

Interpretation will include a map highlighting the larger water system and the history of the reservoir, as well as interpretive signage and education about the storm water management and other environmental features on site. Storm water management has been carefully considered and will include appropriate elements such as a swale by the parking lot and a wet meadow, which will also provide a wildlife habitat. A woodland area along the back and sides of the site will include a variety of native plantings in various layers from a woodland canopy to understory trees and shrubs to an herbaceous layer.

Visitors will be able to enjoy walking paths through the woodland as well as a boardwalk through the wet meadow, and plantings will provide year round habitat for wildlife, and screening for neighbors adjacent to the property. The park development will entail removal of a significant amount of invasive vegetation, but will greatly add to the tree cover with the planting of over 1,700 new native trees, including 25 trees being donated by the non-profit Brookline GreenSpace Alliance (BGSA) in honor of their 25th anniversary. The design review process included working with BGSA on a suitable location for these beneficial trees.

Finally, the design process included a parking and traffic analysis, as well as a noise analysis, to help ensure that the park will be a positive addition to the neighborhood.