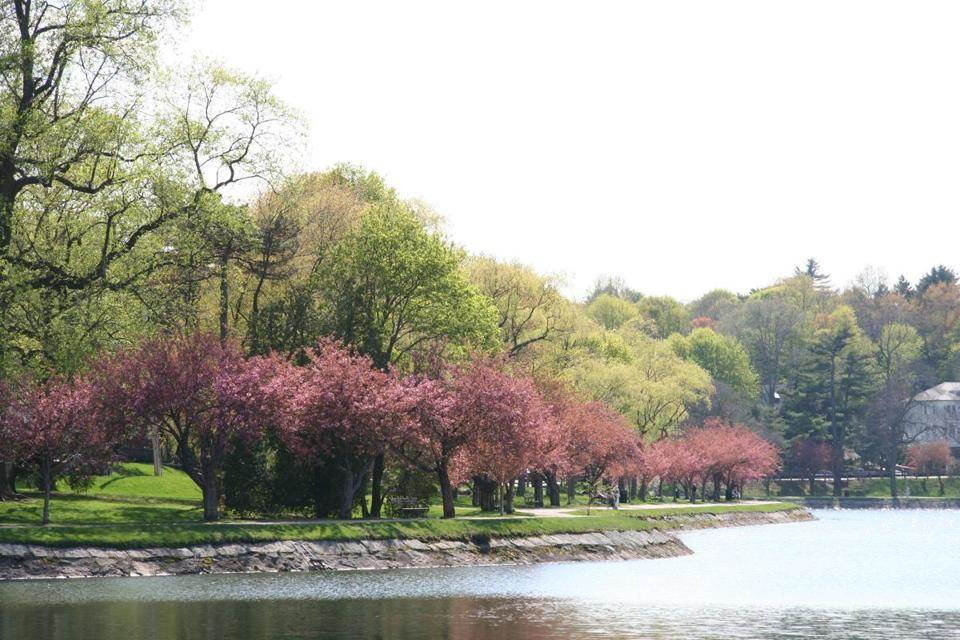 For the overall park renovation, exterior work has been progressing through the fall and into winter, given the generally mild weather conditions we have experienced. The reservoir is almost completely re-filled with the great amount of rainfall we have experienced. With one foot remaining until it is back to its normal level, we expect the reservoir will be fully re-filed by spring. A significant amount of the exterior work is completed, which includes the new valve work within the gate house, slope stone repointing around the reservoir, path widening in front of the gatehouse and resetting capstones along Route 9. In addition, the pathway re-construction is mostly completed, new concrete bench pads, the new ornamental iron fence installed, as well as a new bus shelter, and various landscaping improvements. There is some work remaining within the gatehouse which will continue over the winter through completion. Various park work will continue to be completed as the weather allows, with all remaining work to complete in the spring. Some of these items include final stone dust pathway grading and compaction; pathway paving at the various entrance points; granite curbing at the Warren Street entrance; new sections of concrete sidewalks along Route 9, Warren Street, Dudley Street, and Dudley Way; loam and seed remaining disturbed areas; granite steps and handrails; drinking fountain and light pole installation. Finishing touches will include re-installing the 58 completely refurbished benches around the park. We are hopeful to re-open the park in the spring of 2020, weather dependent.

A separate contract to construct a new rest room within the gatehouse, will occur this late winter into spring. As of mid-January, this project is out for public bid. It is anticipated, this work will also be completed in the Spring of 2020.

There continue to be two construction contracts underway, one for the Brookline Reservoir Park renovation and one for the exterior improvements to the Brookline Reservoir Gatehouse.  The park work is approximately 50% complete, and we just had a 50% review by the Massachusetts Department of Conservation and Recreation’s Office of Dam Safety with positive feedback.  The exterior improvements to the gatehouse are 95% complete, with the only remaining work items being installation of the refinished windows and new doors.  This exterior work was funded in part by  the Massachusetts Preservation Projects Fund administered by the Massachusetts Historical Commission.

Progress on the park renovation is as follows:

At this point the Brookline Reservoir Park construction project is approaching one month of work on site, and work is progressing steadily on the park and gatehouse improvements as part of two separate construction contracts.  David G. Roach & Sons is responsible for the park improvements, including utility improvements inside the gatehouse, and the status of their work is as follows:

Construction has begun at the Brookline Reservoir Park and Gatehouse.  The Reservoir and Gatehouse, built in 1848 as part of Boston’s first municipal water system, is used by the entire Brookline community and beyond for walking, running, fishing, and passive enjoyment of this unique and historic resource.  The project is valued at 3.1M and is funded by 2.2M in capital funding, $500,000 in stormwater/drain infrastructure funding and $400,000 from the Commonwealth of Massachusetts’ Executive Office of Energy & Environmental Affairs Dam and Seawall Repair or Removal Program.  Brookline was fortunate to be selected for grant funding to attend to important infrastructure repair of the Brookline Reservoir dam and flood control structures.  In addition, the Town received a $50,000 grant from the Massachusetts Preservation Projects Fund (MPPF) Round 24 to make improvements to the exterior of the Reservoir Gatehouse.  The MPPF is a state-funded 50% reimbursable matching grant program established to support the preservation of properties listed in the State Register of Historic Places, and it is administered by the Secretary of the Commonwealth William Francis Galvin and the Massachusetts Historical Commission.  The park and gatehouse improvements comprise a unique project in the Town given its many layers, and the key goals have been the following:

It is important to highlight that a multi-year, parallel process was undertaken with the Office of Dam Safety (ODS), initiated by a directive per the regulations to remove all trees and shrubs on top of the dam and plant the area with grasses that could be mowed periodically to allow for visual inspection.  This is the standard treatment for dams across the state, the intent being to maximize structural stability that could be compromised by uprooted trees, penetrating roots, and burrowing animals.  The relationship of the dam to the surrounding densely populated area and the topography means that, although the ODS considers the dam to be well maintained, the risk of loss of life and property should the dam fail could be very significant. The Parks and Open Space Division worked with the ODS to develop an alternative plan that ensured the integrity of the dam while maintaining some trees on the dam, particularly Cherry trees, located above the water elevation.  This plan involved a survey of the existing vegetation, a series of meetings and site visits with Town staff including the Town Arborist, ODS staff, and engineering consultants retained by the Town who specialize in dam improvements, plus development of a Tree Management Plan and a commitment to regular inspections. The changes proposed, especially the tree removals on the dam which is located on either side of the gatehouse and occupies approximately 40% of the reservoir’s perimeter, while necessary, will be a profound change to the visual character of the park.

The Park will remain closed during construction for safety reasons. Work on the exterior of the gatehouse has begun, installation of construction fencing and gates is complete, and we are currently working on drawing down the water in the basin to allow access to the valves and masonry, vegetation removal, and installation of a coffer dam at the gatehouse.  Work is expected to be completed by the end of the 2020 construction season.  You can follow the construction progress by visiting the Town’s website at this web site, https://www.brooklinema.gov/1408/Brookline-Reservoir-Park or contacting Annie Blair, Landscape Architect with the Parks and Open Space Division, Department of Public Works, by phone at (617)730-2616, or by email at ablair@brooklinema.gov.

The bid package for the park improvements has been completed and is currently available to contractors.  Bids are due on March 19th, and an encouraging number of contractors have indicated interest.  Once a successful low bidder has been established, the contract will be awarded and executed by the Select Board, and we hope to begin construction as soon as weather permits this spring.  In the meantime, the Office of Dam Safety is reviewing the proposed work and we are engaging in a dialogue with them about work on top of the dam structure.  The majority of the utility work and valve repairs are being included in the park improvements contract.

There are two separate contracts for work at the Gatehouse itself, one for exterior improvements consisting of repointing the granite and window and door replacement, and one to construct the gender-neutral restroom inside the Gatehouse.  The successful bid for the exterior improvements came in below budget, which will allow us to increase the scope, and the low bidder is a contractor who has done good work for us in the past.  Architectural design for the interior work is approaching completion and is incorporating comments from the Preservation Commission, which has been reviewing the work along the way.  The exterior work will take place first and should be complete by the end of June. Interior work will happen after the utility and valve improvements have been made

After four public Design Review Committee meetings, the Park and Recreation Commission voted approval of the park’s landscape preliminary design, its scope and budget, and the base contract with add alternates. The proposed site work for the park is under review by the dam and geotechnical consultant team, and then will go to the ODS for their review and comment. We hope to issue a site construction package for bidding in 2019.

Outside of the park’s landscape improvements, the Gatehouse is also in need of a number of improvements:

Separate efforts are underway to address the construction of the restroom in the Gatehouse and its attendant utilities, and the valve repairs. While the park plans are under review, we are acquiring additional necessary survey and utility information for conditions below the water at the Gatehouse and the architectural design is proceeding.

Brookline Reservoir Park is a 32 acre park surrounding a man-made body of water approximately one mile in circumference.  The Reservoir was completed in 1848 as the terminus of the Cochituate Aqueduct, Boston’s first public water supply.  Its key architectural feature is the Lower Gatehouse, an elegant granite structure.  The park’s recreational and landscape features include a stonedust walking path around the perimeter of the water basin, a series of entrances into the park, over sixty memorial benches, signature flowering Kwanzan Cherry trees, and a mix of mature woodland trees, primarily deciduous.  There are some open lawn areas used for passive recreation.  The park is a destination for Brookline residents from all neighborhoods in the town as well as visitors from other communities.  The park is listed on the State and National Registers of Historic Places, and was declared a National Historic Site.

The park is in need of a number of landscape site improvements:

In addition, the Massachusetts Department of Conservation and Recreation’s Office of Dam Safety (ODS) is requesting the removal of vegetation on top of the dam structure itself in order to prevent potential dam failure due to downed trees and burrowing animals, and allow regular visual inspections of the dam’s condition.  The Town has engaged the services of a dam and geotechnical engineering firm to aid us in conversations with the ODS about the ultimate impact on the park’s character.

The project’s goals prioritize maintaining the park’s character while addressing the necessary improvements.