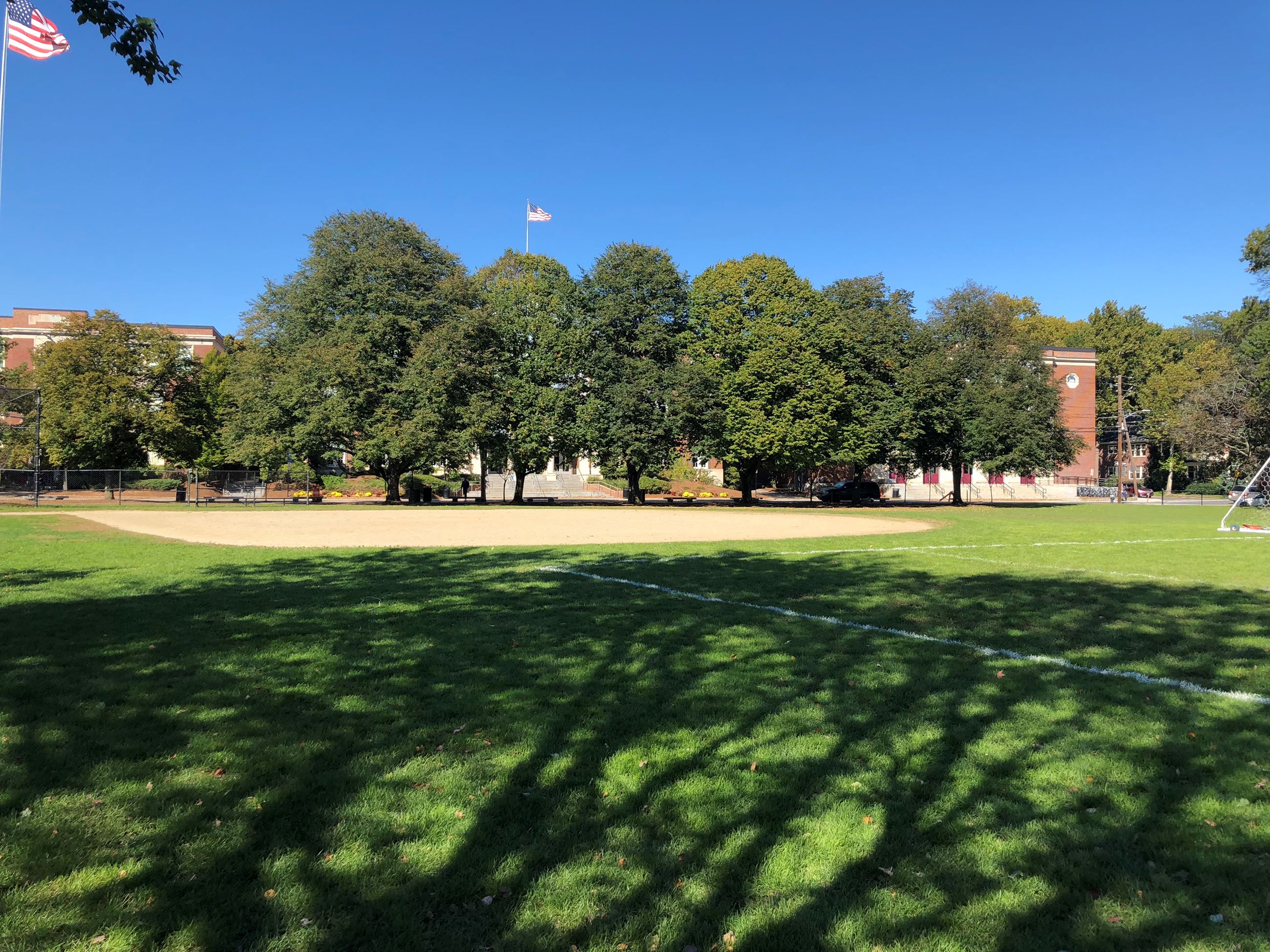 Cypress Street Playground is considered to be one of the first municipal parks established for playground purposes in the United States, built upon land purchased in 1871. At the time, it was conceived to create a public space for various outdoor activities, a new concept at the time. The 5.22 acre site is bounded by the main High School building to the west, the Gym and Aquatic Center to the south, as well as the Brookline Hills Green Line MBTA Station.  To the east is Cypress Street with neighborhoods beyond, and to the north is Davis Ave with additional neighborhood abutters.  Greenough Street fronts along the High School and Tappan Street fronts the Aquatic Center and Unified Arts Building.

If you would like to receive updates for this project, please join our project ListServ.

The one-acre part of the site used by the high school through the end of school is now fully available to the contractor and work in that area has begun in earnest.  Work continues overall on the sports field and especially in this area of the site.  Subsurface drainage work is near completion.  Subgrade of the field is also near completion.  Trenching for main irrigation lines will begin soon, followed by rough-in of the main irrigation piping. Later this month, drainage stone beneath the field will start to be placed, along with the “flat drain” drainage system spaced across the field.   On top of this stone layer, the root zone soil mix will be placed, in which the natural grass will be established.  The large topsoil pile at the end of the site near Cypress will start to be processed to create the root zone soil mix.  Root zone mix placement and seeding will be in August/ September.

All athletic lighting has been installed.

At the High School end of the site, along Greenough Street, removal of the existing sidewalk is underway, and layout of the new plaza area on that end has begun.  This new plaza area will be integrated into the sidewalk along that edge, and come into the site along the edge of the softball field. It will include concrete and concrete paver bands, and will include permanent picnic tables once completed.

The Town continues to monitor all tree health around the site.  The fertilizer treatment provided to the two Red maples last month seems to have helped. Though still showing signs of stress, they appear in better condition than reported last month.

New light pole bases for the new sports field lighting system have been installed and the poles will be installed on those concrete bases in the coming weeks.  Trenching for electrical utilities is also currently underway.

As construction progresses, the Town is monitoring all existing trees around the site.  The trees are protected by construction fence or have individual trunk protection. There are two red maples along the Tappan Street side of the site, that were previously listed in “fair” condition by our Town Arborist and currently appear stressed.  This past spring, severe cold followed by a premature warm-up and numerous 90 degrees before June 1st, caused extra stress on all trees but manifested itself at an accelerated rate on these particular trees.  The contractor is providing extra water to these trees and our Town Arborist also had them fertilized with a mycorrhizal fertilizer soil injection to provide them a boost.  We will continue to monitor all trees on the site to ensure they are safe and healthy.

Work continues on the site. The fenced off area of the site for Brookline High School will remain inaccessible to the contractor though the end of the school year. The remainder of the site has been stripped of the topsoil and is being brought to subgrade.  The contractor has excavated a large pit along Tappan Street, opposite the Kirrane Pool Building, which will house a subsurface groundwater infiltration system, to help alleviate some of the surcharge the local street drainage system receives. Work on the subsurface drainage system for the new natural turf athletic field will begin in mid-May.

The large pile of soil in the corner of Cypress and Tappan is composed of all of the topsoil that was stripped from the site. This material will be amended with sand and organic matter to create the soil mix utilized for the new athletic field, then re-spread over the field. Remaining topsoil will be used in other landscape areas around the site.

The large granite blocks stacked along the edge of Davis St have been hand selected by the project designer from a granite supplier, and will be placed at various locations around the site as part of the overall project design. They will be used for retaining walls in various locations on the site, as part of the new splash pad, and other design features across the park.

Cypress Street playground is now under full construction. The site is fully enclosed by a temporary chain link fence.  All trees slated for removal have been removed, with the exception of a few smaller trees still on site which are expected to be dug for transplant. The end of the park nearest the high school is fenced off from construction through June 2021, to allow the High School outdoor space as they return to school.  Currently, there are four tents set up in that space for use by the high school community.

Highlights of the current work include:

- Removal of existing field grass and topsoil; being stockpiled for re-use in the sledding hill area of the site

These field stripping operations will continue this month as the contractor prepares the new natural turf field area for sub surface drainage work. 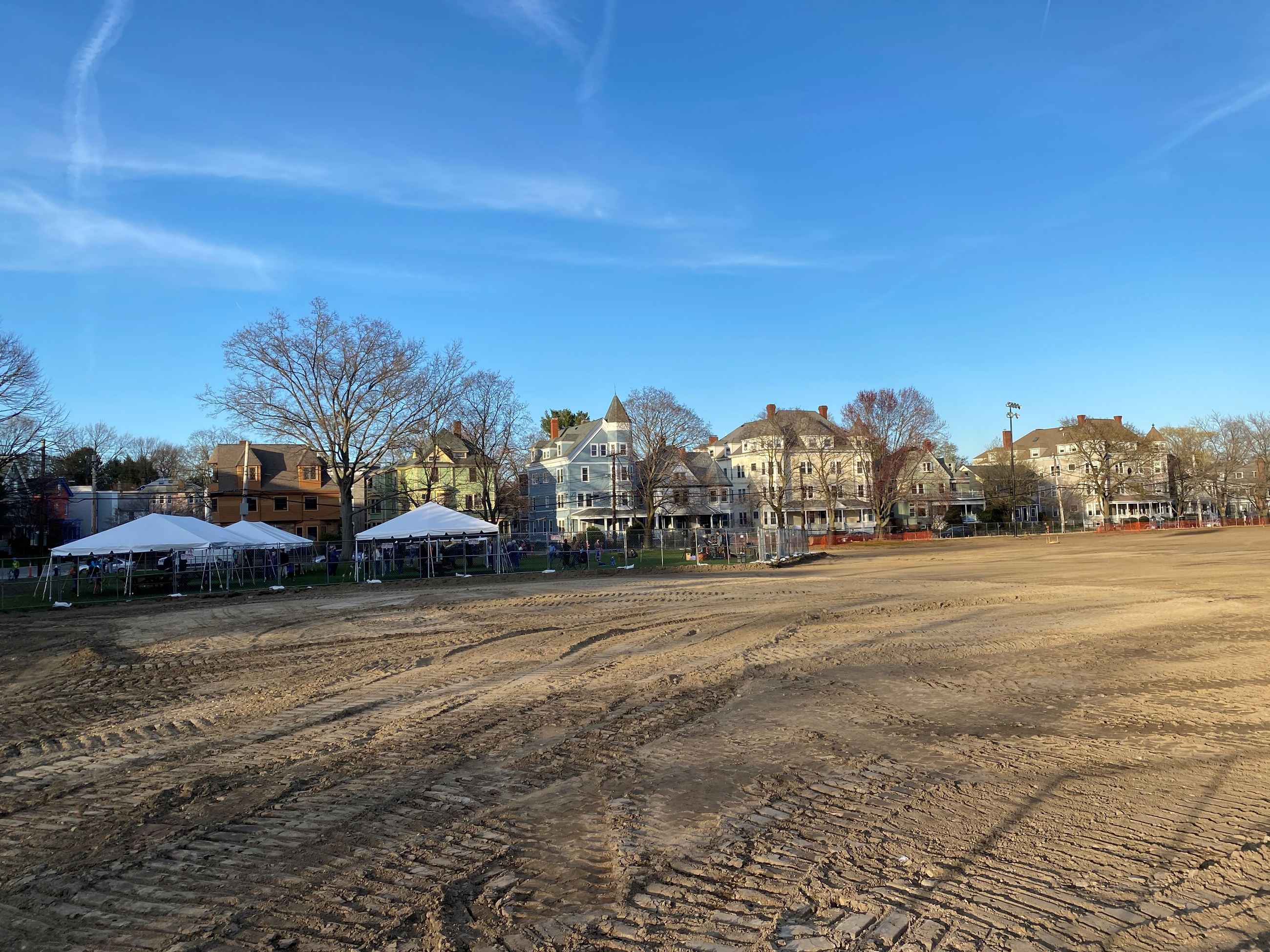 Cypress Park is lined with trees along all four sides, with some internal trees at the end towards Cypress Street. During the design review process, the Town's Arborist and Senior Landscape Architect performed numerous reviews of the trees through all seasons to ascertain their existing health and condition. This assessment became the basis around which the new design was developed. As part of this project, sixteen (16) trees were identified as in poor condition and ten (10) in fair/declining condition that are recommended for removal. These include the small street trees on Greenough Street, select struggling trees along the park's perimeter and four (4) of the six (6) Linden Trees that have structural defects. One (1) tree in good condition had the top snap off in a wind storm and will be removed and replaced. There are two (2) good quality trees scheduled for removal to accommodate a new handicapped-accessible path into the park along Tappan Street in association with the high school project. Four (4) trees will be transplanted, and 54 new trees will be planted in this project to create the next generation of tree canopy for the site. Removal of the trees in poor and declining condition, including some invasive species such as Norway maple, will ultimately allow the planting of new trees and a significant improvement in the park's overall tree health and canopy for the future.

Following approval by Town Meeting in November of 2020, there were some further delays in making the funding available for the project.  This was recently resolved, and the construction contract was then officially awarded to Heimlich Landscaping and Construction Corp in mid-February of 2021.  The Contractor is now poised to mobilize to the site and begin this work. The contract time has been adjusted after the year long delay and the new completion date will be September of 2022. Our Parks and Open Space Team has been in continuous coordination the Brookline High School team throughout the process, not only to find integration in the two designs, but also to find ways to best allow safe pedestrian mobility around the site throughout construction.  We have recently met with the BHS team and have found a way to adjust the limit of work line as prescribed in the contract for the Cypress Playground site, to provide almost 20,000 sf of space along the Greenough Street edge that can still be utilized by the High School though the end of the this school year in June.  This work is ongoing, as both project deadlines have changed, in addition to the effects of Covid on the norms of life in general. As works gets underway, we will do our best to keep the public informed through regular updates to this site.

The project was publicly bid in late May and bids were publicly opened on June 18, 2020.  All bid results can be found on the Public Works bidding page here: https://www.brooklinema.gov/1776/PW-20-15-Cypress-Street-Playground . We anticipate that the project will be awarded in late Fall 2020 following Fall Town Meeting, and expect construction to begin in early Spring of 2021.

The project was nearly completed and prepared for bidding in February into March as mentioned below, but was delayed with various final detailing and coordination issues between the Town and our consultant on the playground and other items. Along came Covid-19 and the project was further delayed. Both the Town and our design consultant have been coordinating through these trying times and we are now close again to being able to put the project out for public bid. Per the original schedule when the project was going to be bid in February/ March, the construction in the park was scheduled to start in July 2020. We are still hopeful that the construction can begin in July 2020 under the new bidding schedule, which places the project out to bid in May. The design remains the same as presented throughout the Design Review Process and as represented in the January 1, 2020 Cypress Playground Rendering in the “resources” tab to the right.

The Parks and Open Space staff and their design consultant, Weston and Sampson are working on preparing construction documents for the project, with the objective to place the project out to bid in February/March 2020. Following up on one of the new design elements within the park, the Parks staff prepared to present the new handicap accessible pathway from Cypress and Tappan down to the crossway on Tappan, to various Town Committees, to obtain their approval. Town staff presented the new pathway concept to the Commission on Disability on December 12, 2019, to the Pedestrian Advisory Committee on December 16, 2019, and finally to the Transportation Board on January 13, 2020. All three boards and committees gave unanimous support to this new accessible pathway. Work also continues on making refinements to the playground equipment, making it accessible along the new proposed accessible path at the edge of the playground.

We have held four Design Review Committee Meetings to date, the most recent occurring on June 19, 2019. With our design consultant, we continue to progress the overall park design in conjunction with the design work occurring concurrently at the high school. The overall design is becoming more harmonious for the overall park, while additional detailed design continues on some of the seating areas including near the high school as well as the playground area. In addition, our consultant has been working on various grading studies to consider how the various elements will integrate into the existing park. Significant efforts regarding review of the current overall tree canopy has also occurred and those findings are being carefully integrated into refinements to the overall design. The next Design Review Committee Meeting # 5 is scheduled for August 14th, 2019.