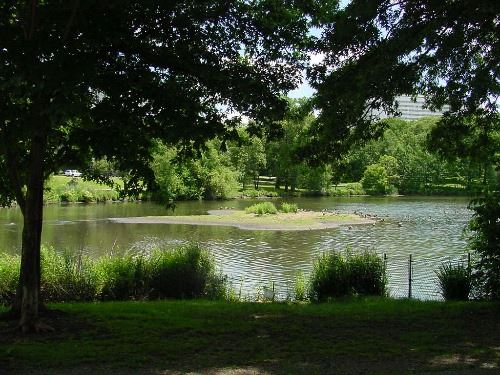 MassDEP (Department of Environmental Protection) is working to address intermittent fuel oil discharges from the Village Brook outfall to Leverett Pond. They are conducting an Immediate Response Action to investigate the source and mitigate the fuel oil impacts.

Discharges of petroleum products at the Village Brook Drain outfall into Leverett Pond were first noted as a sheen on the water in May of 2021.  The Town of Brookline Department of Public Works notified the Massachusetts Department of Environmental Protection (MassDEP).  The initial MassDEP response action was immediate, addressed the visible sheen, and at the time was thought to be effective.    In the fall of 2021, there was additional evidence of petroleum as noted through a sheen and/or odor at the outfall.    MassDEP was notified during each of these incidents and responded.  These follow-up investigations by MassDEP included unsuccessful attempts to trace the source back up through the drains, with the goal of identifying and correcting the problem. There was no further evidence that followed, and the issue was believed to be an isolated release or residual material and DEP suspended its investigation.  However, in April of 2022, the Town observed the sheen had reappeared and notified MassDEP once again.  A sheen or petroleum odor has continued to be an intermittent problem at the outfall.

MassDEP has been working with their spill response contractor to address the intermittent fuel oil discharges from the Village Brook outfall to Leverett Pond, and recently identified the Brook House Condominiums property as the likely source of the fuel oil infiltrating the Village Brook culvert and has identified Brook House Condominium Trust as a Potentially Responsible Party for the fuel oil release. Brook House Condominium Trust has hired a Licensed Site Professional and spill response contractor to conduct the necessary response actions at the site.  Identifying and eliminating the migration pathway(s) that is (are) resulting in the fuel oil discharge has been challenging because the discharge is intermittent and the infiltration of the culvert is apparently occurring in a section that runs through/below a parking garage with no direct access points.  After testing, an underground storage tank at the Brook House was found to be faulty.  Product in that tank is being pumped out and further investigation continues.

At this time MassDEP considers maintenance of booms at the outfall to be the best viable interim option, until further investigation and remediation at the Brook House property is completed to identify the specific source and extent of the fuel oil contamination and the migration pathway(s) into the culvert.  While clean-up is underway you will see activity to remove the absorbent booms/pads and put in 55-gallon drums for disposal.   You may also see activity associated with the Brook House pumping out their storage tanks and ongoing testing.

MassDEP has a public involvement web page that may be of some interest to residents who have questions about the cleanup process or who are interested in public involvement:  https://www.mass.gov/lists/public-involvement-during-cleanup-of-contaminated-properties.

As with all uncontrolled releases, this is a dynamic situation that may change over time.  Therefore, the Town of Brookline will work with MassDEP to periodically monitor conditions at the outfall and track the progress of response actions being conducted by the Brook House.

We are thrilled to announce that work on Phase 2 of the Muddy River Flood Risk Management project commenced recently in both Boston and Brookline. This construction project has been in the works for over 20-years. The overall project objective is to increase flood control through improvements to restrictive drainage culverts and by dredging accumulated sediment and removing invasive vegetation that is constricting flow. Positive ancillary benefits include improved water quality and enhanced aquatic/riparian habitat within the Muddy River; bank stabilization; landscape restoration guided by Frederick Law Olmsted’s famed “Emerald Necklace” design plans; and enhanced recreational use of the parklands. Charter Contracting Company, LLC was awarded the contract in February and has been working closely with the U.S. Army Corps of Engineers, New England District, and the non-Federal project sponsors (Commonwealth of Massachusetts, City of Boston, and Town of Brookline) to organize and meticulously plan the proposed work, and will continue to collaborate as they move forward with the project.

Phase 1 of the Muddy River Flood Risk Management project, completed in 2016, consisted of the major structural features of the flood damage reduction improvements: the installation of two culverts (one under the Riverway and the other under Brookline Avenue); and daylighting of two sections of the Muddy River at the Former Sears Parking area and at Upper Fens Pond. It also included bank restoration, planting emergent wetland plants and restoring riparian vegetation in upland areas by planting trees and shrubs.

Phase 2 is the final phase of work for the project, stretches from Olmsted Park to the Back Bay Fens and is anticipated to be completed in approximately 36 months. Phase 2 will start along the Muddy River from Leverett Pond to Boylston Street in Boston and Brookline. Approximately 1 to 8 feet of sediment from the bottom of the river will be dredged for flow conveyance. Additional work will include control of ground and surface waters; restoration of wetland and riparian vegetation; habitat creation for fish, turtles and amphibians; pedestrian and vehicular traffic control; pedestrian management; protection of historic structures and landscape features to remain; invasive species control and selective clearing of vegetation; and maintenance of all restored areas with the limit of work.

Due to the urban setting of the project location, extensive management of pedestrian and vehicular traffic at construction access points and at each work area will be required to minimize impacts to roadways and parkland systems, and to ensure public safety. At least one pathway will remain open at all times for shared pedestrian/bicycle access.

The removal of accumulated sediments from Leverett Pond is anticipated to begin in September and continue through the Fall season. Upon completion of the work the landscape and pathways will be restored to their pre-construction condition.