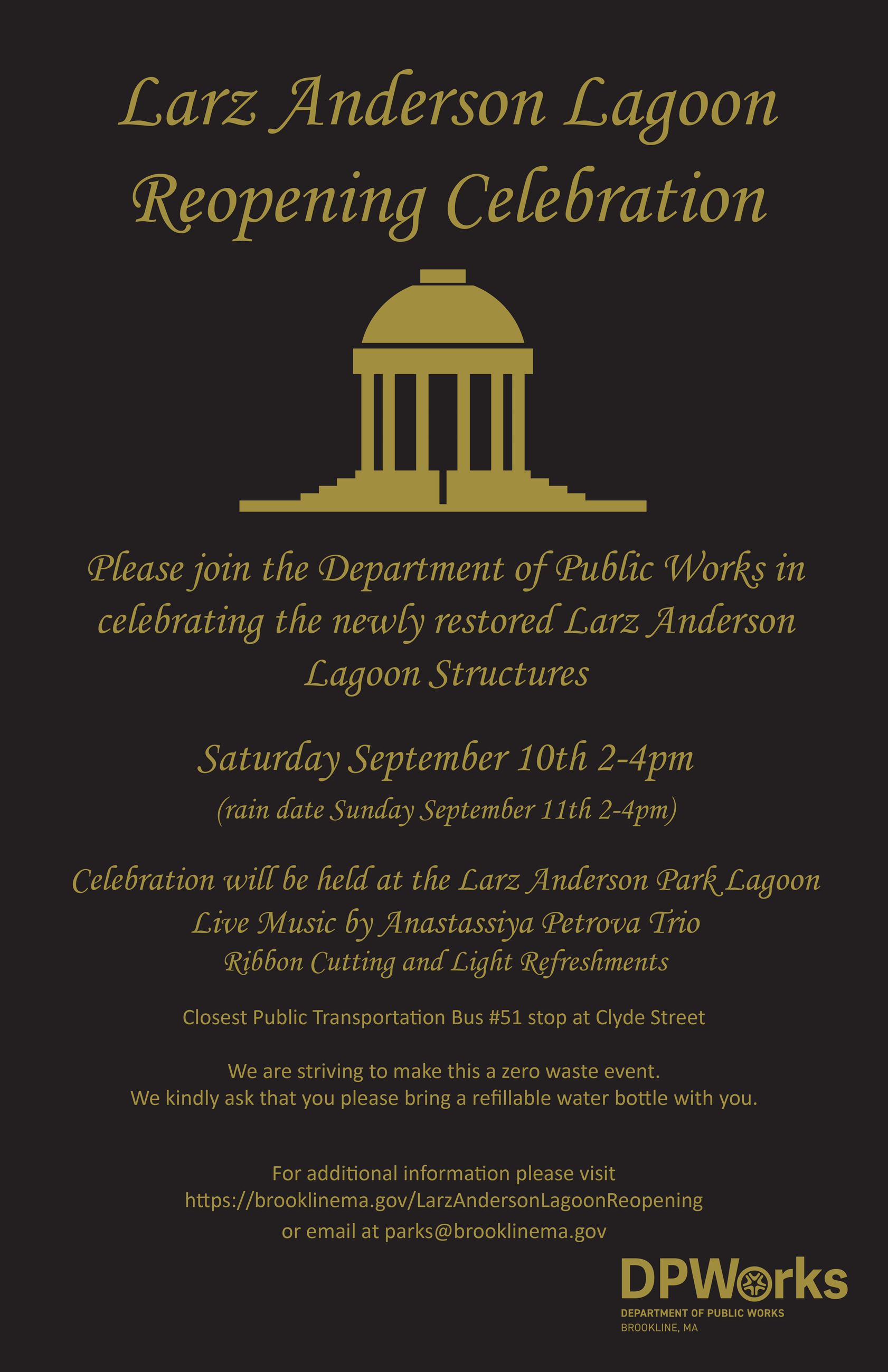 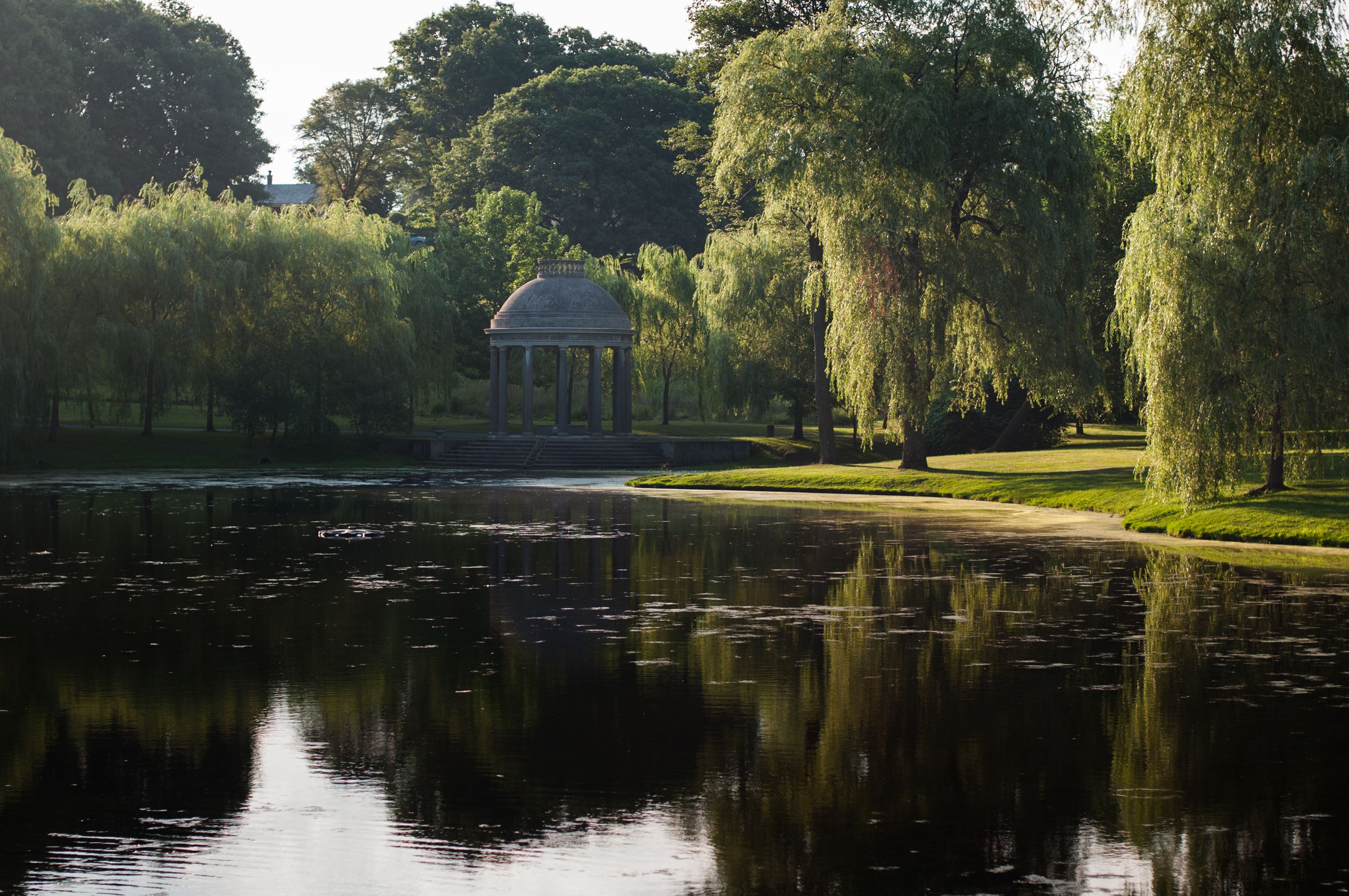 Work is completed on the project except for a few small punch list items, that should not affect the full use of the area by the public.  Unfortunately, due to the current drought, the water level of the lagoon has dropped dramatically preventing use of the restored fountain within the Tempietto.  Once adequate water levels return, we hope to turn that recirculating fountain back on.  Also related to the drought conditions, we have had poor establishment of the grass.  We hope to have the contractor return in early September to re-hydroseed the area.  A grand opening celebration is planned for September 11th!

Following Memorial Day, the last components of project work will be underway.  Construction of the terrazzo floor inside the Tempietto will be commencing, and weather dependent, is expected to take about one week.  There is also a new water supply system for the fountain within the Tempietto, and work to start-up that system will also be ongoing, expected for completion about the same time.   The lagoon area has recently been re-paved and the disturbed areas, re-seeded.  The contractor will be removing the temporary fencing around the site, re-opening the site to the public.  The newly seeded areas will be cordoned off with stakes, ribbons and snow fence during establishment.  We ask that the public stay out of these areas while they establish.  We are very excited for the completion of this project and the return of this cherished space for the use and enjoyment of the public!  Thank you for your patience while the work was underway

The Contractor returned to the site April 4, 2022.  Work has resumed on the Tempietto, starting with the cast in place concrete stairs at the base of the Tempietto, which lead into the lagoon.  The Tempietto was fully erected into January, and work will recommence on the finishing touches to that work, including pointing and caulking of the various joints inside and outside the structure. As work completes on the stairs, the Tempietto work will occur in the coming weeks.  Within the Tempietto, there is a resurrected fountain element, which takes water from the lagoon, into the fountain, then recirculates it back into the lagoon.  Associated work on this element will be occurring in the coming weeks, which includes a new recirculating system to filter that water.  There are a few finishing elements on the Tempietto that are weather dependent; that work will be occur based on weather conditions in May. There are some finishing touches that remain on the Footbridge, adjacent Weir Wall, and Causeway that will also be concurrently occurring.  Later in May, final paving will occur to the pathways around the lagoon.  Currently work is anticipated to be completed very early June, just ahead of the U.S. Open. 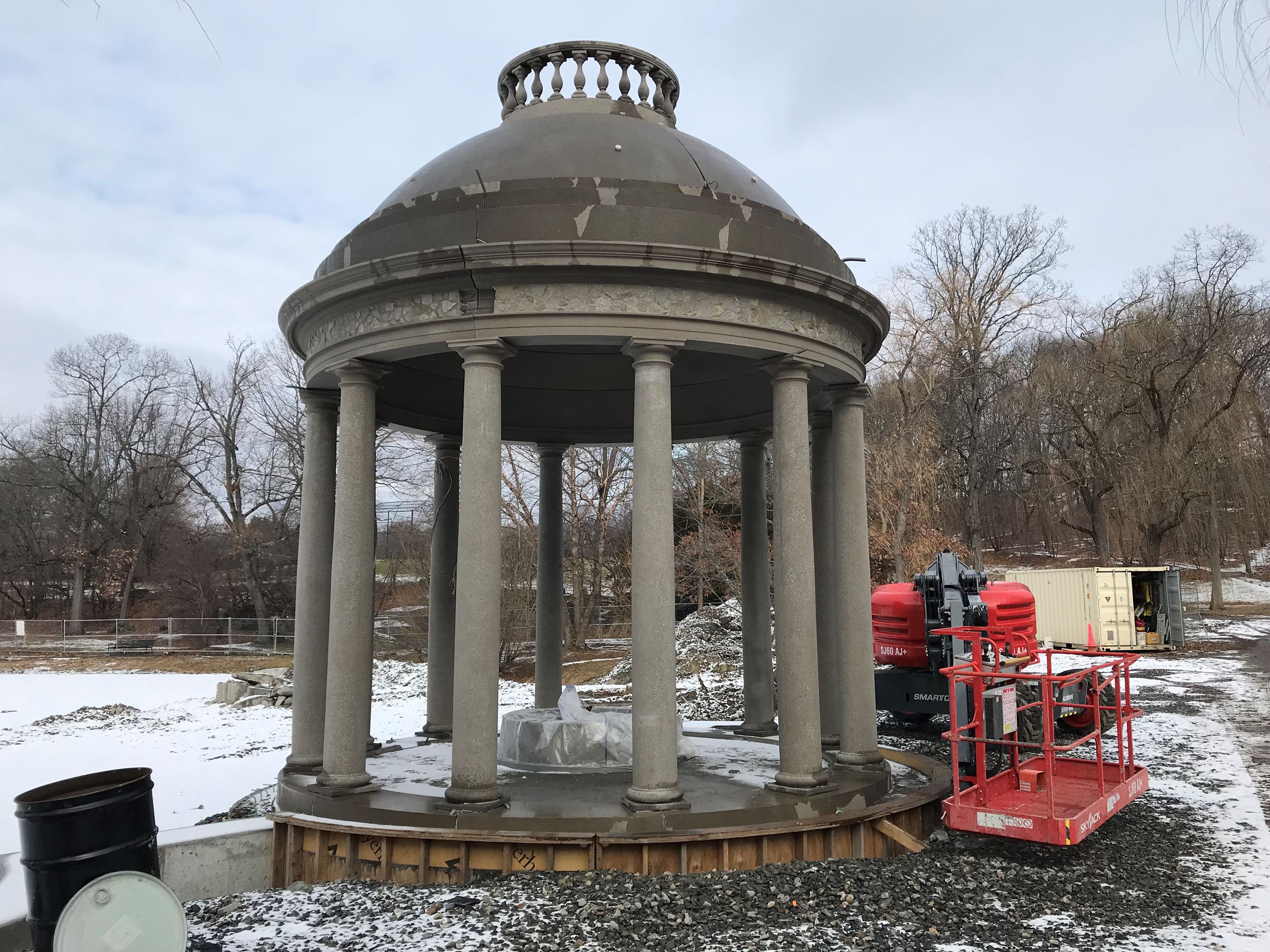 Work has stopped for the winter.  The Contractor will return early spring to complete the remaining work, and anticipate about two months of work remaining.   Check back in mid-April for a new update and anticipated schedule for completion.

As we approach the end of the year, work continues on the site.  Since the last report, various delays due to supply chain issues have caused work on the Tempietto to continue to the present. The various pre-cast base elements have been set, as well as the columns and entablature (piece that rests a top the columns).  The dome elements are still in production, expected in January 2022. The contractor intends to set the majority of the Tempietto pre-cast elements before shutting down for the winter.  The railings have been installed along the Causeway, which completes the Causeway except for the final paving surface. The contractor still needs to install the railings on the footbridge (railings on site) and weir structure (railings still in production.)

Due to weather delays late into November, the overall project paving work was not completed. This includes all of the pathways around the lagoon, some new pathways, some to be re-paved over existing pathways, and also the pavement over the new Causeway. As some of the railings are still not installed, and the pathways area in various states of completion, some paved, some not paved, the site will remain fenced off and closed until spring due to safety concerns. Once the contractor completes his work for the season and shuts down, he will return in early spring.  The pavement work around the site will then occur as soon as temperatures allow.  The terrazzo flooring inside the Tempietto is very temperature sensitive, so will occur likely in May.  An update will be provided as to completion once we have a firm schedule from the contractor this winter. 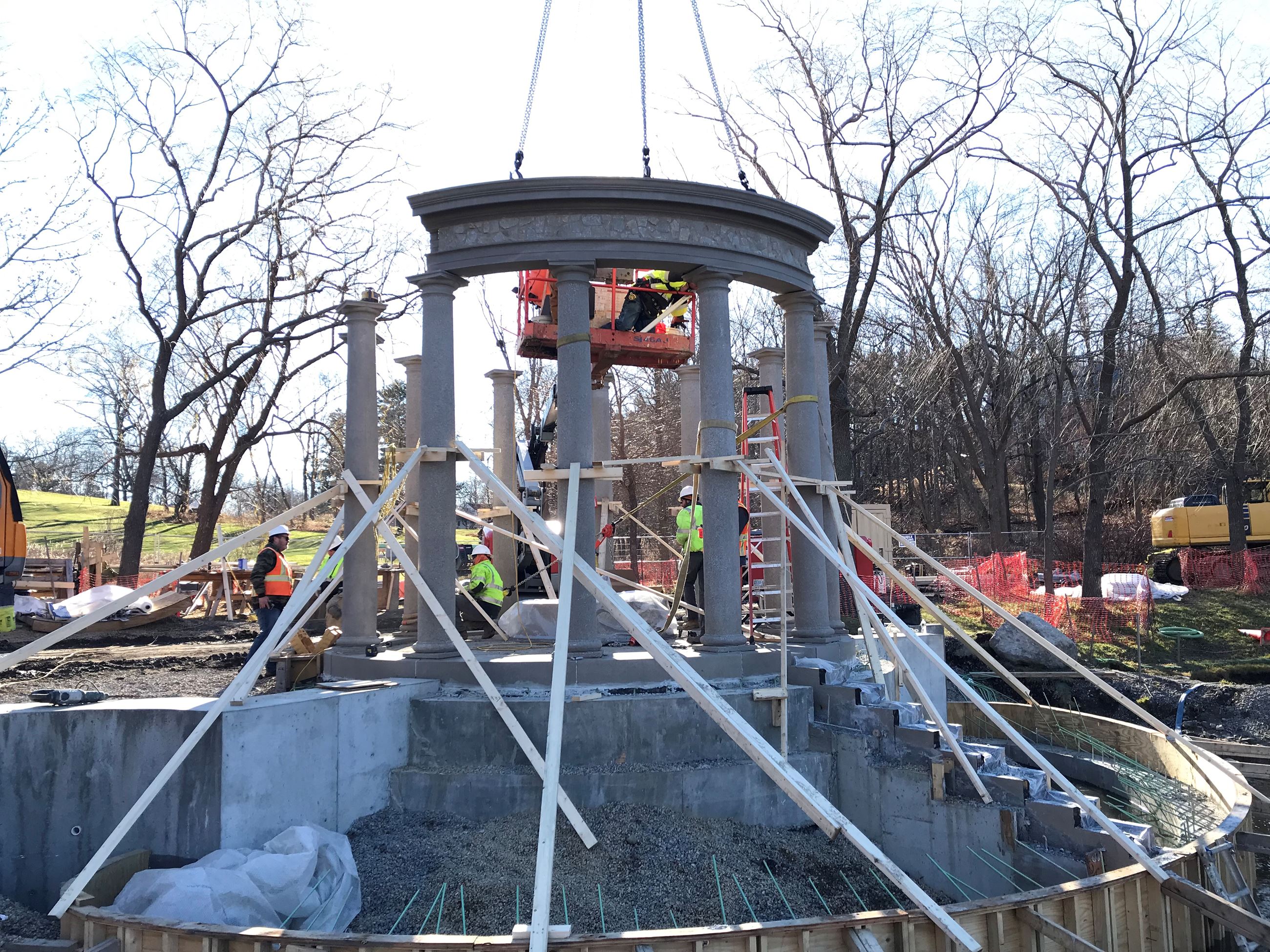 The footbridge remains as last reported, awaiting the installation of the handrails.  The Causeway is mostly complete, with work now proceeding on the two curved staircases that abut the structure, looking towards the Tempietto.  Much of the Tempietto foundation work is complete, with work currently proceeding on the curved retaining walls that abut both sides of the structure. The precast work is a bit delayed from what was reported below, both those pieces are expected to start to arrive in October.

The footbridge is nearly completed.  The new railings are beings fabricated and will be installed later this fall.  The Causeway is under construction and the two main sidewalls are ongoing.

Work is anticipated to continue into the fall.

All three  structures at the Larz Anderson Lagoon have been demolished (Tempietto, Causeway and Footbridge).

Work will continue to progress this summer on erecting the three structures from the ground up. The new concrete work at the weir structure, located at the end of the lagoon along Goddard Avenue, is completed. The design team is currently reviewing sample mock-ups of the Tempietto.

The "Temple of Love" was taken down on May 3rd.  Various components of it were salvaged to confirm some of the various details for reproduction of the structure.  Some will be retained for future display of the original structure.

Work is underway on repairs to the weir structure along Goddard Avenue. This is the outlet at the far end of the lagoon where the water exits the site.

The contractor will also begin working on the subsurface foundation for the new Tempietto, building the below ground foundations for the stairs and walls, then the base for the new replica structure to replace it.

Beneath the footbridge and causeway, some unexpected subsurface conditions were discovered upon excavation of the footings, finding a substantial depth of clay beneath.  Working with the design team and the contractor, a pile system will be added to support the footbridge and Tempietto.

The demolition of the "Temple of Love" is scheduled to begin the week of May 3, 2021.

Construction is well underway at the lagoon area.  The Footbridge and Causeway structures have been completely removed, and preliminary work is beginning at the footbridge to start reconstruction.  The town and their consultant team are working with the contractor on concrete colors and textures to match the original work.

Work within the lagoon itself has also started, with the sediment from the bottom pushed up into piles along the various edges.  This work was performed to return to some of the original depth of the lagoon by excavating some of the accumulated sediment back down to the original clay liner.  This sediment will stay piled for about two months while it dewaters.

Most weeks, the contractor is on site Monday through Thursday, for four 10 hour days and is not on site on Fridays, unless they feel they have fallen behind in schedule or missed a day during the week due to rain.

Construction is Underway at the Larz Anderson Park Lagoon Area

Construction has begun on the various structures around the lagoon. A temporary construction fence has been erected around the work area.  Some dewatering (temporary lowering of the water within the lagoon) is underway to assist with the re-construction of the three main structures. The footbridge has been completely removed and the causeway is currently being removed.

The contractor will begin reconstruction of the three structures, starting with the footbridge, then causeway, then tempietto. Work will likely progress simultaneously between the three, as different trades perform their work. The work on the footbridge and causeway will be “cast in place” concrete work, meaning the contractor will build formwork on site, then place new concrete within these forms to re-construct the replacement features.  They will be replicated to match the former structures. The tempietto will be re-constructed through a combination of cast in place concrete and “pre-cast” concrete.  Pre-casting is typically performed at an off-site location, in this case at a factory that specializes in highly detailed architectural work. They will create molds based on the various components of the existing tempietto and use a 3-D electronic model to create a replica of the existing structure.   Our design team has reviewed various finishes of the existing structure, to best match them with the new pre-cast components. Once the cast in place stairs and walls are completed, the precast components will be delivered to the site and erected in place to re-build the tempietto from the ground up.

The Brookline Department of Public Works wishes to inform the community that long-awaited renovations and construction in the iconic lagoon area of Larz Anderson Park will begin this month.

The famous architectural firm of Little and Browne designed the three structures, which were built around 1910.

The Town has spent many years assessing the conditions of structures at the park, prioritizing work, and soliciting community feedback at public meetings. The Town’s primary objective is to retain as much of the historic character and detail of the structures as possible within modern construction methods and to ensure public safety. This project will address structures that the preservation consultant determined to be “at the end of their service life and in need of replacement.”

Larz Anderson Park is Brookline’s largest park, at more than 61 acres. The park was once the estate of Larz Anderson, a diplomat, and his wife, Isabel Anderson. Isabel Anderson bequeathed the land to the Town in 1948. The willows, lagoon, and tempietto served as the site of many theatrical performances held for charity. Many of the plays performed there were written by Ms. Anderson.

SumCo Eco-Contracting of Peabody was awarded the contract for the project and will begin work in March, including demolition and replacement of the three structures, replacement of adjacent pathways, and accessibility improvements. The lagoon area will be fenced off and closed to the public during construction.

This project is scheduled to reach substantial completion in December 2021. For additional information contact Scott Landgren, Senior Landscape Architect with the Parks and Open Space Division, Department of Public Works, by phone at 617-264-6490, or by email at [email protected].