A Family Revealed: From Slavery to Hope 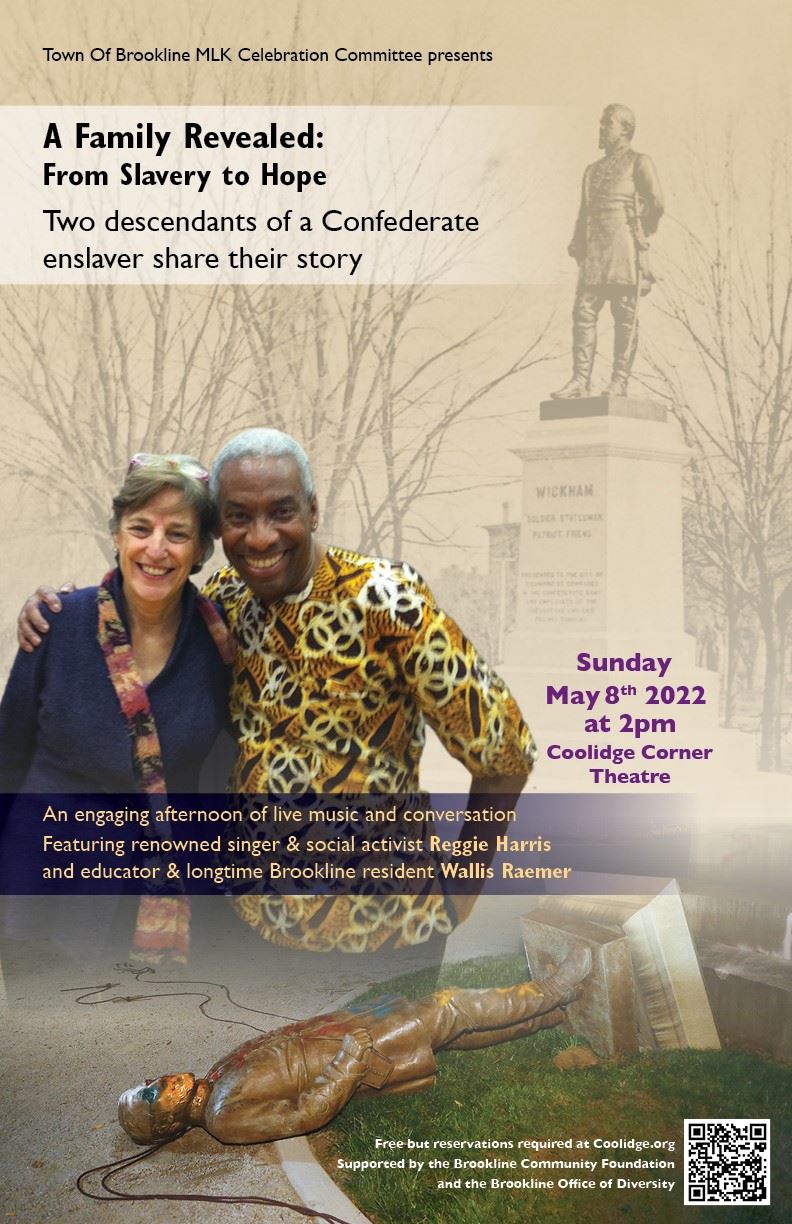 A Family Revealed: From Slavery to Hope

An afternoon of engaging music and conversation, A Family Revealed: From Slavery to Hope, Two descendants of a Confederate enslaver shared their story, featured folk singer and social activist Reggie Harris and longtime Brookline educator and resident Wallis Raemer. Onstage, the two cousins, one black and one white, discussed their special journey and what it was like to discover each other’s deeply held feelings, pain, and hope. To underscore their messages and experience, Reggie Harris, a prominent interpreter of the use of music in historical movements for social change, sung his stirring, original songs.

Ms. Raemer, who grew up in Richmond, Virginia, thought it was cool to have a statue of her great-great-great grandfather, Willams Carter Wickham, in the center of town. But as she grew older she changed her mind-- especially after meeting Reggie Harris, who also is a descendant of the same Confederate general but by way of Bibanna Hewlett, one of the 275 people that he enslaved.

For Mr. Harris, a wonderfully gifted folksinger and educator, the statue was painful reminder of the abuse his family suffered and the refusal of America to fully acknowledge its past.

After the white supremacist rally in Charlottesville in 2017 Wallis and some members of her family wrote a letter to the city requesting that the statue be removed. But it remained until protesters dragged it down with a rope.

This is real history and it’s complicated. But Reggie and Wallis are facing it by talking it out and through music. They’ve shared their journey on CNN, in a recent film, in schools and in an article in The New York Times.

Onstage at the Coolidge Corner Theatre, through music and in conversation with the audience, they discussed what it’s like to discover each other’s deeply held feelings and pain. You will not want to miss Reggie Harris’s stirring voice, vibrant guitar playing and original songs that underscore their message of hope.

Sponsored by the Town of Brookline Office of Diversity, Inclusion, and Community Relations and supported by a generous grant from the Brookline Community Foundation. We are especially grateful to the Coolidge Corner Theatre for the donation of the use of the main theater and for video recording provided by BIG, Brookline Interactive Group.

Each year MLK Day provides an opportunity for Brookline residents to remember a hero martyred in the effort to achieve equality in America. Despite his sacrifice and that of many others who participated in the Civil Rights Movement, and, despite the progress made in the nearly 50 years since his death, full equality has not been achieved.

Brookline’s MLK Day is an expression of the Town’s commitment to racial equality. During the year, the Committee will sponsor and plan events that bring us together to celebrate our diversity, to learn from one another, to better understand how racial inequality divides us, and, most importantly, how we may work together to achieve the goal of equality.

Apply OR Check Membership
Notify Me
About Meetings

View All Agendas and Minutes