The Conservation Commission understands that native ecological communities across Brookline are a vital resource for Brookline, both for its residents and for the wildlife that inhabits this area. Certain non-native invasive plants have been disrupting natural areas in Brookline and causing a loss of native biodiversity.

What Are Native Plants

"Native" or "indigenous" plants are defined as those that evolved in our area and in similar habitats and were growing here before the first European contacts with North America. Plants that people call "wild flowers" may be native or non-native plants. For example, Pink Lady Slipper, Canada Mayflower, and Wintergreen are native plants of Massachusetts forests. Certain kinds of violets and asters are native plants, while other kinds of violets and asters found in our woods are non-native.

Native plants can survive and establish new plants without intervention by humans. Some native plants are quite adaptable, and can survive human intervention. Brookline's natural areas and minimally managed lands provide habitat for remnant populations of these adaptable plants. However, even these plants can be crowded out or extirpated by intense use by humans and their pets or by non-native invasive plants. 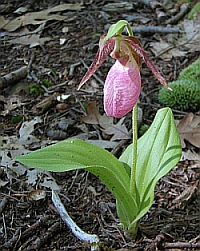 Other native plants are more vulnerable to human disruption and habitat changes. Those that rarely set seed and do not multiply rapidly from roots or rhizomes cannot survive multiple disruptions. Native plants that survive only in very specific microhabitats are lost when the microhabitat is disrupted. Plants that are useful or beautiful, such as Pink Lady Slipper, have been dug from the wild and have become rare in most of Brookline's natural areas.

No one knows if there is any kind of native plant that can disappear from local natural areas without precipitating other losses. This is particularly problematic in our area, where farming, residential uses, and urbanization have successively destroyed natural areas, leaving only disconnected fragments of natural habitats.

The term habitat refers to the places that provide all the resources (such as food, shelter, protection, and opportunities for offspring) that individuals need for their entire life cycle. Each species requires specific plants and animals for survival. Those plants and animals require other plants and animals. The whole suite is a tangled web of intertwined habitats, called an ecological community.

Groups of plant and animal species that have been living together for millions of years under particular conditions, such as in wetlands in the northeast or grasslands along the coast, have evolved together. The survival of 1 species may depend on other species in the ecological community, even if it does not directly benefit from those other species.

Changing conditions or disruption of the habitat of 1 or 2 species of plant or animal may result in a cascade of disruptions and losses of species in a given location, or across an ecosystem, or even globally.

Certain plants that have never before been part of our local ecological communities have been causing disruption and harm to native habitats. We refer to these plants as non-native invasive plants. They are also called invasive exotics or aliens.

The plants that concern ecologists are those that are both non-native and invasive, and that also have the potential to crowd out native plants or disrupt or destroy native ecological communities. Such plants are causing considerable disruption and harm within Brookline and across the world.

Non-native plants evolved in some other place or in a different kind of habitat. They may have spread here from nearby parts of North America, or been brought in from any part of the world, whether by early settlers or by recent gardeners eager for new and exotic plants.

Non-native plants can become invasive - they escape cultivation and spread vigorously into the native landscape. Plants that are native to other parts of the U.S. and are not invasive in their own ecological communities can become invasive and disruptive when they become established in a new setting.

When a non-native invasive plant establishes itself in our natural areas, it can out compete and harm native habitats. It can destroy a network of plants and animals required for food, shelter, or reproduction of an array of species. Loss of even 1 species can cause a chain reaction of loss in native biodiversity.

Not All are Harmful

Not all non-native plants are invasive and native plants can be invasive without being harmful. When non-native plants do not spread from gardens, they are not considered invasive. A locally native plant plays an integral role in its local ecosystem, even when it grows aggressively. For example, poison ivy provides berries that are edible for birds and rodents, leaves that certain insects eat, and shelter for the many native animals that do not have an allergic reaction to it.

It is hard to trace how non-native invasive plants are spread. Often the source is plants growing as "weeds" in yards or along roadsides. The seeds may be carried by birds or other animals or by wind or water. They may travel on car tires, on snowplows, or with landscapers.

Monitoring the health of native habitats is an ongoing need, not only because of the threat from non-native plants but also from continuing threats from development, urbanization and global climate change.